Portrait of a Lady: Denny Theocharakis 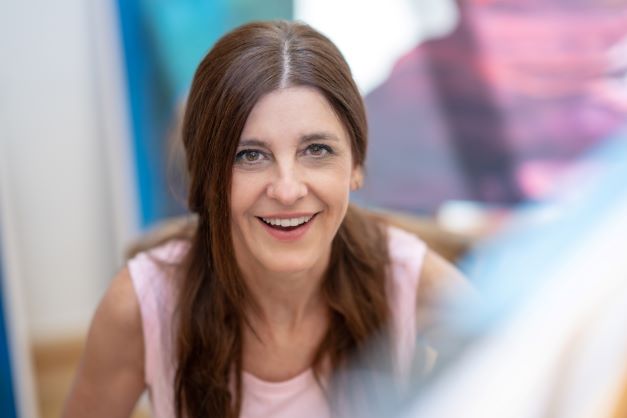 I mainly draw my inspiration from Henry James’s famous – and beloved – novel (as well as from the well-known French perfume “Portrait of a Lady”), but here I will try to compose the portrait of a specific lady, Denny Theocharakis, who, in these recent, weeks is appearing in many art columns – and not only – with her two almost consecutive art exhibitions. 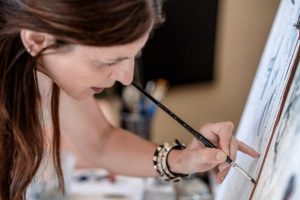 The first one is a group exhibition, “START Art Fair 2021”, at the famous Saatchi Gallery in London, and the second is a solo exhibition of paintings and photographs at the Evripides Art Gallery, entitled “the silence of the glance”. The content of each exhibition is completely different, with the “silence of the glance” to impress with its richness and number of exhibits, as it “speaks” of a complex talent that refuses to be moulded and categorized with one, single style code.

I am not an expert or art critic. I greedily “consume” art as a spectator with my senses and I emotionally “count” on, the shiver, the euphoria and the exaltation that (I like) to causing me. These exactly where my feelings with these exhibitions, which I visited in person.

I approach “Denny Theocharakis’’ case even more emotionally, because I happen to have known her, I think in depth, and to have hanged out with her at various stages of hers, and my own life, professionally and later completely more personally. So today, on the occasion of her exhibitions and her overall public “exhibition”, I succumb to the temptation in publicly analysing the puzzle of a complex portrait, with many and completely different talents that she demonstrates in different fields of activity. 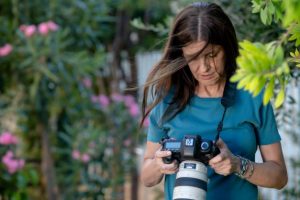 As she states: “My course was relatively predefined, as 3rd generation into the family business, being focused on cars and other mobility vehicles. This led me after school to the Economics Department of Law School and later to MBA at NYU. I must admit that, from my studies, I more liked business finance”.

However, I remember her as a high school teen being brought by her father after school, to all group of companies’ department meetings, encouraging her to express an opinion, something that made her blush and invoke her ignorance in order to remain silent.

When I met her again at the same offices, 15 years and “three children later”, she had gained not only knowledge but also opinion, which she always documented in a very calm, but steadfast way. Something that betrayed a lot of “reading” and preparation.

“In everything I do, I am dedicated; I entirely devote myself into it. I believe this is the only way one can obtain results”. If this involves a trap, that of entrapment, perhaps persistently, in a single field, Denny systematically avoids it. “I don’t like it, nor can I be self-contained to only one field of activity. I like many different things and whatever I feel I can do well and enjoy along the way, I will do it. Because only when you do something because you love it so much, you succeed, exactly as it is worth doing it just because you love it”.

This is how she started to develop her other important profile, that of an athlete. “As a student, I ran, like my sister, in school track and field competitions, especially in 100m. Later I started to love the long distance runs and so I decided to deal with systematically, focused with organization and objectives”. This is how, in search of training programs that would suit her already busy daily life, after many months of preparations she decided to take part in marathon runs, Athens, as well as Boston.

“For me, there is no competition in Marathon runs, in the sense that if one is properly prepared, will somehow finish. My main competitor is myself, meaning that, I have to achieve to surpass my previous performance and to score a better time”. I remember her well again, leaving the office in the afternoon after having worked for 8 hours going for a run, to train, sometimes in the winter in the dark. “Apart from marathons, I also enjoy running in mountain running competitions, for example on Olympus, Paranesti, as well as in Hydra and Spetses. Contacting with nature on these routes is unique and awesome”. 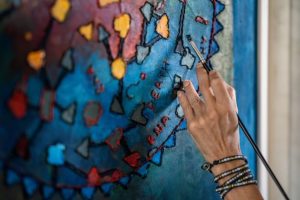 Now we reach another chapter of her life, namely art. Clearly influenced by the family environment and of course by the paternal model, the one of her father & businessman, Vassilis Theocharakis, who is also a renowned painter, she starts ‘trying her hand’. The desire for studies in painting that she had put aside awakens in her again, as she decides to dedicate herself to business not only for succession reasons, but also because she really liked the world of cars. She quickly realizes, empowered by her professor Panagiotis Beldekos, that if she wants to have chances of acceptance and recognition in the field, it is necessary to study at the Athens School of Fine Arts.

“More freedom, less oppression by goals/must to/plans. More love, more truth. I want to believe that this is what is coming”.

She gets convinced – after all, she is a fan of lifelong learning. Despite her busy schedule as a mother of three children and as a Managing Director, she studies endlessly, enters the School on the second try and completes her studies successfully. I remember her coming to business meetings apparently tired, having spent the night in her workshop, but with obvious passion speaking about the lessons and with admiration for the professors she apprenticed at their side.

“Apart from painting, sculpture, photography and the multiple techniques I was taught, my studies at the Athens School of Fine Arts, and above all, my professors (Psychopedis, Tranos, Baboussis) helped me to figure out where I want to go artistically. How to learn from the great artists, but also how to clarify my personal stigma. That I don’t want to look like and remind of anyone else, because I just want my work to be myself. I want my artwork to reflect who I am, and how I am. That for me is honesty in art. “I never think when I paint or photograph if people will like me, but if I ‘express’ my message honestly.”

The sense of honesty and authenticity emerges many times during our conversation. So simply honest, and without confusion in speaking, this is exactly as she is in her relationships – professional, family, friendly and personal ones. I would add that in a seemingly simple manner, the way of truth, she manages to overcome the obstacles and difficulties of life. 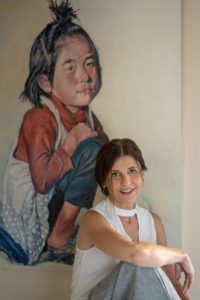 “Most of my artworks have emerged from traveling all over the world. I don’t travel to far away destinations as a tourist, I always get away from the safe tourist plan. I believe that I’ve been definitely influenced by Eastern cultures – Asia, India – as well as from Africa and South America, than from Western Europe. I’m influenced by the philosophy of life and the way of thinking of these countries’ people, which differs so much from ours. In all my artworks, I like to see the way out, the redemption. I believe that in these places I mentioned, despite the degraded living conditions, not only for us Westerners but objectively, people have conquered a peace of mind and a simple joy of life that we miss a lot “.